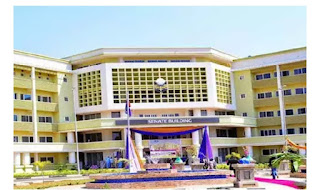 As a result of alleged plan by the Ondo State government to relocate the proposed medical school of the Adekunle Ajasin University, Akungba-Akoko (AAUA) from the main campus to a neighbouring town and hometown of the institution’s Pro-Chancellor, Dr. Tunji Abayomi, residents of the host community have called for peace pending the final verdict of Governor Oluwarotimi Akeredolu on the issue.

Already, Oba-In-Council, prominent indigenes and leaders of the community are in talks with the state government over the development hence the need for stakeholders to maintain status quo.

Recently, there has been tension in Akungba community over the move to allegedly relocate the planned AAUA’s Faulty of Medical Sciences from the main campus in Akungba.

In a statement, the community said “although the University is in our town, we don’t own it. The State Government that owns it hasn’t told us that it has set up a Faculty of Medicine at AAUA, let alone establish it as a multi-campus affiliate.”

“Anything to the ODSG’s position is null and void and of no effect. Hence, our people have no ground for agitation over what is non-existent.”

“However, we are making necessary consultation with government on behalf of our people. Negotiation is a better option than unsubstantiated agitation.

“After all, he that pays the piper dictates the tune. Akungba people should not antagonize constituted authority based on false accusations, or mere allegations.”

It was gathered that the Pro-Chancellor, Abayomi who is also the Chairman of Council had allegedly concluded arrangement to relocate the medical school to his hometown in Oke-Agbe-Akoko, a few minutes’ drive from the Akungba’s main campus.

According to one of the prominent sons of the community, Tolu Babaleye, who called on Akeredolu to call the Pro-Chancellor to order, stated that Abayomi had allegedly embarked on a mission against the

mono-campus conventional university stipulated in the establishment of the school.

Babaleye said: “It is worthy of note that the Chairman of Council travelled to America about 5 times on the bill of the university because of this project but only for him to be making moves to dismemberment Adekunle Ajasin University Akungba Akoko which is a mono-campus conventional University established by law.

“The Chairman has signed MOU without letting anyone know the contents as if he is a Sole Administrator of AAUA.

“I don’t know why the Chairman is hell-bent in relocating the branch of AAUA to his homeland because he is not the first Pro-Chancellor of AAUA. At the last count, Chief Ogunjobi, Senator Bode Olajumoke, Mr. Dan Nwanyanwu, Otunba Oladunni (from Okeagbe too), etc have been Pro-Chancellors and Chairmen of Council at one time or the other and none of these personalities created crisis in AAUA, why Dr. Abayomi Tunji?

“I, therefore, call on the Governor of Ondo State to call the Council Chairman who now operates the University Council alone like a Sole Administrator without input from other members to order.

“The same Chairman wanted to unilaterally appoint a Vice-Chancellor without the input of other Council members the other time until the process was stalled due to protest from other members of the Council; the same Chairman is now singlehandedly planning to dismember AAUA contrary to the enabling Law. I could remember that the State Governor signed an MOU at Abuja with some German Doctors to establish a medical village in Akure and not Owo because the governor is from Owo.”